I opened up an internet browser. The first page, as always, was Google search engine. The "Google Doodle" was a colorful drawing of some woman. 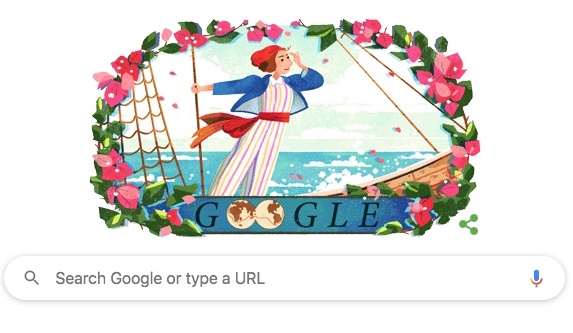 "Hmm, who's that?" I thought, and clicked on it. Turned out, it was Jeanne Baret, the first woman who circumnavigated the globe. Reading that Wikipedia article, I learned that having private toilet facilities on the ship helped her disguise her gender and spared her from having to use the head on the ship.

"Hmm, what's a head?" I thought, and clicked on the link. Turned out, the head was an area of a ship where everyone went to... well, poop, basically, quite openly. (There are many quite descriptive images available on Google :).) In that article about toilets on ships, it mentioned that on submarines the toilet facilities are very difficult to build and operate - to the point that some ships have sunk because of it.

The story is so spectacular I might just quote directly from the Wikipedia article for it:

"On 14 April 1945, 24 days before the end of World War II in Europe, while U-1206 was cruising at a depth of 200 feet (61 m), eight nautical miles (15 km; 9.2 mi) off Peterhead, Scotland, misuse of the new toilet caused large amounts of seawater to flood the boat. According to the Commander's official report, while in the engine room helping to repair one of the diesel engines, he was informed that a malfunction involving the toilet caused a leak in the forward section. The leak flooded the submarine's batteries (located beneath the head) causing them to generate chlorine gas, leaving him with no alternative but to surface. Once surfaced, U-1206 was discovered and bombed by British patrols, forcing Schlitt to scuttle the submarine. One man died in the attack, three men drowned in the heavy seas after abandoning the vessel and 46 were captured."

And this is why I so love Google. I learned all this because I opened an internet browser.

PS. What I am going to do with this knowledge is another matter altogether :D
Posted on 27.7.20